Tsue Da Tee (Cui Dadi, 1903 – 1974) was born in Beijing and trained as a teacher. However, he believed that life is about living and living is experiencing, so he left China in 1937 to travel extensively in the Southeast Asian countries and eventually settled in Singapore in 1946. 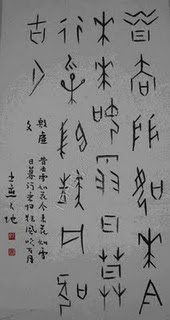 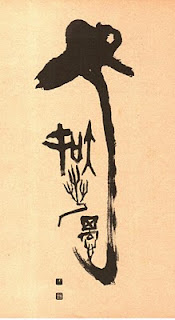 Since young, he developed a strong liking for the Chinese calligraphy and practiced extensively various calligraphic styles. His constant search for knowledge led him to visit London in 1953. While there he found the opportunity to do research in Chinese calligraphy, especially the oracle bone inscriptions at the British Museum. He also held several calligraphy exhibitions in London and Paris.He left London in 1958 and headed for Penang where he spent several years to focus on refining his calligraphic skills. While he did not teach calligraphy in Penang, he had definitely left a mark there. Today, inscribed sign-boards with calligraphy written by him can still be seen at many places in Penang. In 1965, he finally returned to Singapore and devoted the rest of his time to teaching and promotion of the Chinese calligraphy. He was the volunteer calligraphy teacher of the Calligraphy Society of the Hua Yi Secondary School. He also held many exhibitions of his works in Singapore and Malaysia.
In his teaching of Chinese calligraphy, it was almost a rule to start with the Wei stele, followed by zhuan (official seal style), kai (regular) and then walking and cursive styles. All the work books were appropriately selected by him for students according to their progress in learning, personality and character. In this way, the students could fully develop their own potentials and characteristics.
To many of those who are followers of the art of Chinese Calligraphy in Singapore and the surrounding region, the mention of Tsue Da Tee evokes deep respect and admiration for a man who was well known for his calligraphy.
He was one of those rare calligraphers in Singapore and Malaysia who were skilful in many calligraphic styles, such as kai (regular), li (clerical), cao (cursive), zhuan (official seal), bronze and oracle bone inscriptions. In addition, he was not afraid of experimenting and opening new grounds in the calligraphic art. His beautiful and controlled brushwork – the dense sweeping strokes bearing the characteristic twists and turns – were skilfully executed with intent to express the underlying meaning and emotion of each character or form. He was truly a prolific artist and his works are noted for their vitality, strength, grace and beauty.
Some of his students who are well known calligraphers in Singapore include Yong Cheong Thye (Yang Changtai) and Goh Yan Kee (Wu Yaoji).
It is rare to find someone in Singapore who earned his living as a professional calligrapher, and Tsue was one. It is a pity that his works are not systematically studied and preserved.
.
崔大地（1903-1974）出生于北京，是一名受训教师。然而，他相信生命就是生活，生活就是体验，所以他于1937年离开了中国，尽情游览东南亚各国，并于1946年来到新加坡。

This site is managed by the Nanyang Calligraphy Centre, the region's No. 1 Chinese calligraphy sites.本地区数一数二的书法网站。